Waterhead Castle stood on the banks of the upper reaches of the River Nith, between the now abandoned Waterhead Farm and the Castle hill, upon which may have stood an older wooden fortification.

In the late 15th century Lord Alan de Cathcart pledged many lands in his barony of Dalmellington to Roger de Craufurd of Dalleagles including Beoch, Marshallmark, Knockburnie and Lanehead in the vicinity of Waterhead. [See Appendix].

The Beoch lands, including a tower, passed to the Craufurds of Lefnoreis while by the early 16th century Waterhead appears to have been back in the hands of the Cathcart family.

A stone saved from the ruins of the Waterhead Castle was embedded in the walls of the buildings of Waterhead Farm upon which were carved the initials “AC and AD”, those of
Allan Cathcart and his spouse Agnes Dunbar (fl. 1602 -1630). Their daughter Marion later married her neighbour Daniel Mitchell of Craigman. Thankfully the stone was saved when the farm was demolished and is now in safe-keeping. 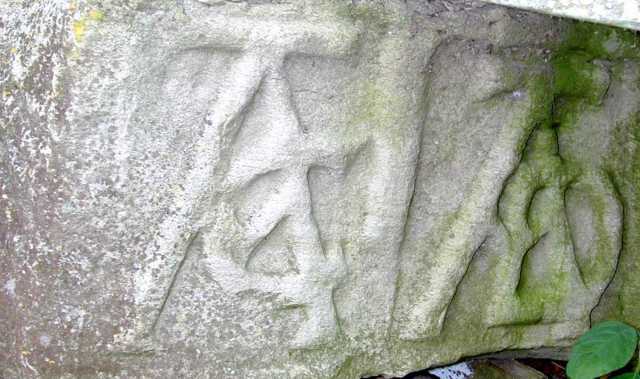 In the late 1970’s the New Cumnock local history club under the leadership of the incomparable Donald McIver carried out their own Time-Team exercise (before Time-team existed) and uncovered considerable parts of the castle’s foundations – a fantastic experience.  One of the finds included a graphite marker probably hewn from the nearby Craigman graphite mine.

River Nith with Castle Hill in the distance 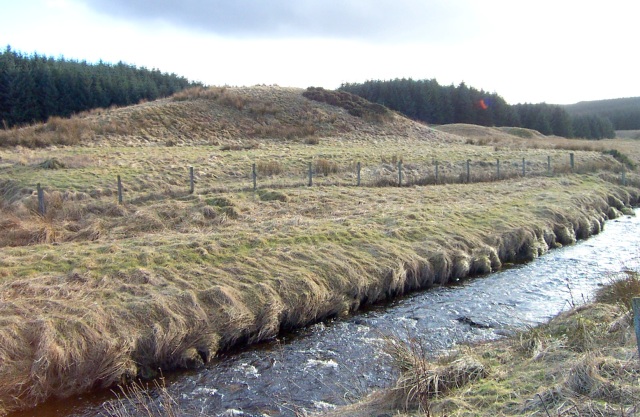 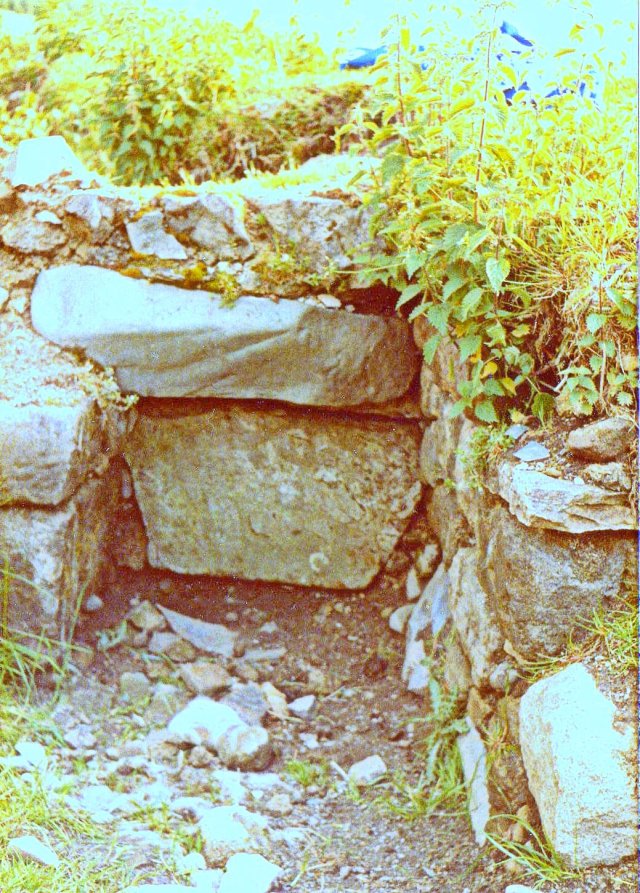 The amorphous earth and stone mound, which is up to 0.5m high, was partially excavated in 1978-9. The main exposed feature is a 12.0m long, 1.0m wide and up to 1.4m high wall which is oriented NE-SW. Central to this and at right angles there is a 3.2m length of similar walling. A fragment of curvilinear walling adjacent to this wall may be part of a stair tower.

At Edinburgh, 31 May (1427).
THE KING confirmed a certain indenture,- [in which Lord Alan of Kethkert knight, lord of the same, pledged and offered the title of pledge (?) and renounced to ROGER of CRAUFURDE lord of Daleglis,-his own 10 merk lands in his barony of Dalmelyntoun, in the sheriffdom of Air, viz. the farthing land of Benbane, the obulatam (?) land of Drumcalder, the farthing land of Lathanis, the farthing land of Molynnach, the farthing land of Dalwar, the farthing land of Rewach, the obulatam land of Knocbyrny, the farthing land of Marchaleholme,- for £46 13s. 4d. sterling; which the said Roger paid to the said Alan as necessary:- to be held by the said Roger and Elisabeth his spouse and the longer living of them and their heirs and assignees from the said Alan, his heirs and assignees, until such time as the said Alan and his heirs or assignees shall have paid £46 13s. 4d. upon the high altar in the kirk of St. Conval of Cumnock on one Sunday between the sunrise and setting next following the one festival of the birth of the blessed John the Baptist (ie 24 June):- also the said Alan yielded to the said Roger and Elisabeth and their said all farms and proficua (?profits) of the said lands, having been levied in the meantime, for counsel and aid:- returning to the said Roger and Elisabeth one secta (?vote) at the three head courts annually held at Dalmelyntoun, with an annual return of 2 merks, 1d.:- Moreover if they shall have been expelled from the said lands, Alan obliged himself, his heirs, etc, and all his lands of Cathkert and Sondrum, etc … .
At Sundrum Tuesday next after the feast of the birth of the Lord 1384]:- witnessed by John bishop of Glasgow chancellor, John Forstare chamberlain, Robert of Lawedre knight, justiciar; Walter of Ogilby treasurer.
(N.B.This seems to be more of a wadset/rental agreement than a full transfer of property.)
Properties: Benbane (Benbain, Dalmellington), Drumcalder (Drumkalladyr, New Cumnock), Lathanis (Lanehead?,New Cumnock), Molynnach (Maneight, New Cumnock), Dalwar ?, Rewach (Beoch ?, New Cumnock), Knocburny (Knockburnie,New Cumnock), Marchaelholme (Marshallmark, New Cumnock)