Knockshinnoch is probably the most evocative name in the parish of New Cumnock and since 1950 the name often precedes the word ‘Disaster’. Knockshinnoch conjures up mixed emotions. In the darker moments we grieve for the 13 men that lost their lives after moss, peat and water engulfed Knockshinnoch Castle Colliery on the 7th September 1950 and yet joyously we also give thanks for the magnificent and heroic efforts of those selfless rescue workers that brought 116 men entombed in the dark depth of the mine-workings into the lightness of a new day. 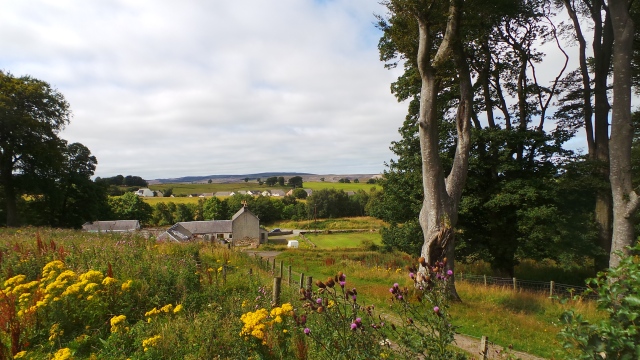 The name Knockshinnoch has its origins when Gaelic speakers settled in this part of the world for it is a corruption of the Gaelic cnoc sionnaich ‘hill of the fox’. The hill is fairly  unremarkable in this upland parish but gained prominence in the late 15th century when the Dunbars of Knockshinnoch built a fortified tower on the north facing slope. These Dunbars were a branch of the family that were the Barons of Cumnock with their baronial seat at Cumnock Castle, in the heart of what is now the village of New Cumnock.  The tower later came into the hands of Hugh Douglas of Garallan and his wife Margaret Craufurd and a datestone (1691) carrying their intials can be found embedded in the byre wall of Knockshinnoch farmhouse (more here).

Knockshinnoch house had replaced the now ruined tower as the home to the lairds of Knockshinnock, a title the Logan family held for some time. This growing family built a new house at nearby Laight and it was here that John Logan of Knockshinnoch and Laight entertained his friend  Robert Burns, the bard referring to his host as ‘Laird of Afton’.

It was Burns’ great patron Catherine Gordon Stewart of Afton and Stair that played a huge part in the development of the New Cumnock Coalfield through her husband General Stewart who formed Afton Minerals to work the coal in and around Straid near Dalleagles. Competition appeared in the form of the Lanemark Coal Company and their workings in the vicinity of the farm of Lanemark and from the Hyslops of Bank. Indeed it was the Hyslops that emerged the masters of the coalmasters and it was their Bank Coal Company that acquired Knockshinnoch Minerals and sank Knockshinnoch No.1 and No.2 pits in the 1870’s only to abandon them before the end of the decade. 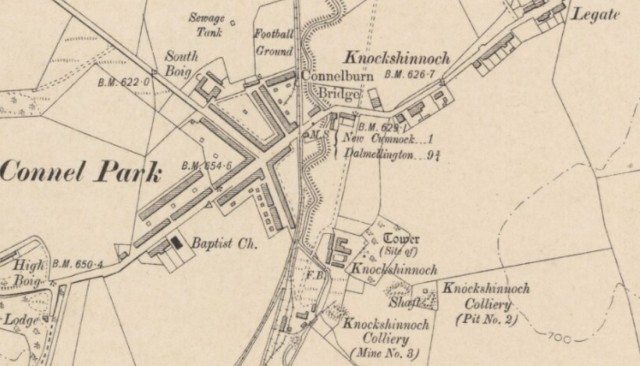 Ordnance Survey Map (1908): Reproduced with the permission of the National Library of Scotland

Hyslop of Bank went from strength to strength and after acquiring the operations of the Lanemark Coal Company and Afton Minerals in 1909 the company was rebranded as New Cumnock Collieries Ltd., and William Hyslop now the Laird of Bank and Afton. Although he passed away in 1936 the company pushed on and three years later returned to the lands of Knockshinnoch to open the Seaforth Mine and then later sink the shaft of Knockshinnoch Castle Colliery on the site Knocksinnoch No. 2 Colliery,  above the site of the Dunbar’s of Knockshinnoch Tower house.

In 1947 the coal industry was nationalised and the New Cumnock Coalfield operated under the National Coal Board. Knockshinnoch Castle Colliery thrived and in September 1950 another major landmark was reached  with the opening of the pithead baths. A godsend for those that were not only constantly washing their menfolk in zinc baths in front of the fire but the pit-clothes coated in coal dust. On Friday 8th September 1950, the latest edition of the Cumnock Chronicle covered the story of the opening of the baths. However, the paper of course had gone to print some days beforehand for on Thursday 7th September disaster had struck and in devastating fashion.

The following account of the Knockshinnoch Disaster is taken from the informal investigation ‘Accident at Knockshinnoch Castle Colliery Ayrshire’ by Sir Andrew Bryan, H.M Chief Inspector of Mines. The report was submitted to Parliament in March, 1951 by The Right Honourable Philip Noel Baker M.P., Minister of Fuel and Power.

“The accident occurred about 7.30 p.m., whilst the afternoon shift was at work, on Thursday, 7th September, 1950, when a large volume of liquid peat or moss suddenly broke through from the surface into the No. 5 Heading Section of the Main Coal Seam. The inrush started at the point where the No. 5 Heading which, was rising at a gradient of 1 in 2, had effected a holing at the outcrop of the seam beneath superficial deposits and had made contact with the base of a relatively large natural basin containing glacial materialand peat. The liquid matter, rushing down the steeply inclined the heading, continued to flow for some time and soon filled up a large number of existing and abandoned roadways as well as several working places, until it eventually cut off the two means of egress to the surface from the underground workings of the colliery.“ 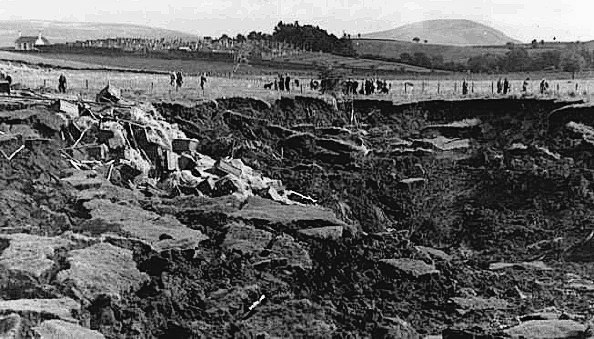 “There were 135 persons employed underground at the time. Six persons working near the shaft bottom quickly escaped to the surface by way of the downcast shaft before it become blocked, while, 116 men, with all means of escape cut off, found their way inbye to a part of the mine then unaffected by the inrush, leaving 13 persons missing. The 116 men were rescued about two days later. The 13 missing men were all employed in or about the No. 5 Heading Section where the inrush began. One was a fireman in charge of the district ; one was a shot-firer ; nine were coal getters employed at the face of three different working places, while the other two were concerned with the transport of coal from the district.” 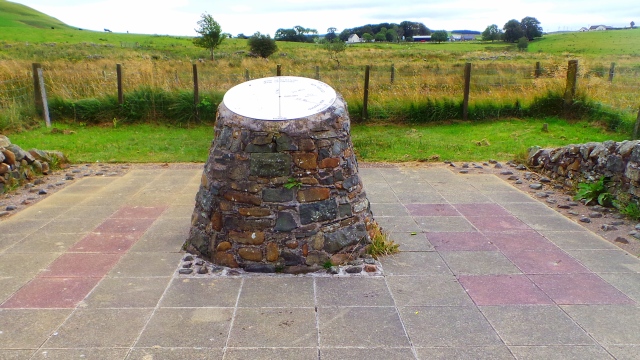 Knockshinnoch Memorial with 13 in the flagstones

The Football Row was one a number of miners’ rows in the mining community at Connel Park , a free kick away from the road-end to Knockshinnoch. It took its name from the football pitch that was home to the local junior side Glenafton Athletic. As in many mining communities football quickly blossomed.

On September 1950, a few weeks into the new season the Football Row fell quiet with news that John Irvine White of 2 Football Row and his near neighbour William McFarlane of 16 Football Row were two of the missing men. The White family were heavily involved in the running of the Glens since its formation and John’s father was secretary of the club for many years.

30 year-old John and 35 year old William were working at No. 5 heading section when the inrush struck and so too was 34 year old John Taylor who lived at nearby Bank Glen.  John also served as secretary of Glenafton Athletic for a period and alongside his headstone at Afton Cemetery sits a memorial shield from the club. 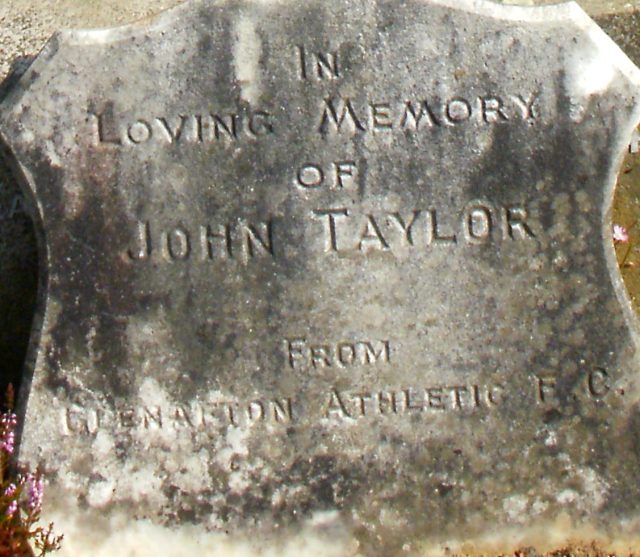 Also lost in the heading was 56-year-old John Smith from the nearby Knockshinnoch Cottage and near neighbour 50-year-old James Martin Love  from the Leggate. So too 26-year-old Samuel Wightman Rowan from Connel Park, his father Walter, also a miner, sadly passed away 3 weeks later. From Pathhead , 38-year-old James Houston perished in the heading alongside 48-year-old William Lee from the new houses at Dalhanna Drive and  Thomas Goudie Houston, 42-year-old from Burnside.

Working at the conveyor belt was Thomas’ brother-in-law 50-year-old John Laine Dalzell, a member of the Salvation Army,  who had moved from Riccarton to New Cumnock where he married Sarah Houston.  Also at the conveyor belt was 61-year-old William Howat from Bridgend, his family no stranger to loss, his brother David and a nephew David Brown were both killed during the Great War.

The Knockshinnoch Disaster also claimed the lives of 49-year-old Thomas Park McLatchie ( a cousin of my father) from Afton Crescent  and 39 year-old fireman Daniel McFarlane Strachan from Smithfield.

In a sombre twist of fate Daniel Strachan lies in Afton Cemetery alongside his wife’s  brother Joseph Walls who was killed in the Bank Pit Disaster of 1938 (more here) , when hutches hurtled to the pit bottom killing 5 miners, including 14-year-old Joseph.

It would be Sunday 10th September before the last of the 116 men trapped underground at Knockshinnoch Castle Colliery was brought to the surface. 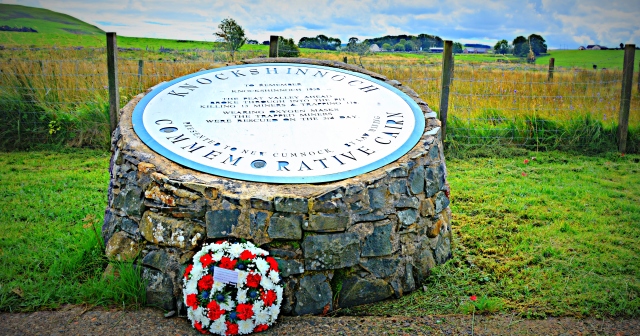