Thomas Harper was born in 1850 in County Down, Ireland, the son of John Harper, cattler dealer and Sarah Hogg.  The family later moved to New Cumnock and in 1861 he livedwith his widowed mother Sarah along with elder siblings Sarah and John at Marshallmark Cottage.  By the time of the next census, in 1871, Thomas and his sister were living at Greenhead Road. 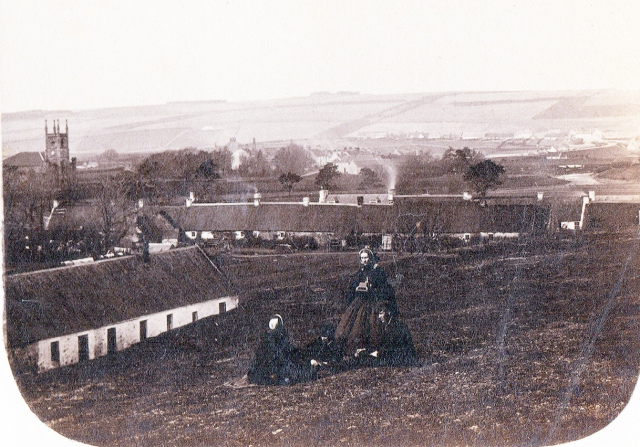 Greenhead Row on the left – Courtesy of Bobby Grierson

In 1876 his 69-year-old mother Sarah died of fever at Connel Park. The following year his sister Sarah married coalminer John Reynolds*, a star forward with Lanemark Football club. The year after that in July 1878 Thomas, now living at Little Pathhead on the Afton Road, married dressmaker Margaret McKnight.

Margaret was the daughter of George McKnight and Elizabeth McKnight descendants of the McKnights of the Old Mill Farm. George was the son of William McKnight and Agnes Crichton, innkeepers at the Castle Inn. Agnes later kept the Crown Inn, where George managed the stable.

Thomas and Margaret set up home at the Castle and it was here on the 17th June 1880 that their baby daughter Elizabeth was born.

Tragically just over 3 months later, 31-year-old Thomas was killed at the Lanemark Coal Company’s No. 1 South Boig Pit on the 25th September 1880 “from injuries received by a fall from the roof of his working place”.

Tragedy struck again in early January 1881, after 5 months of suffering from tuberculosis, Margaret Harper nee McKnight passed away, leaving six-month old baby Elizabeth Harper an orphan. She was brought up by her McKnight family and as a 20-year-old she lived in the Kirkport as housekeeper to her aunt Elizabeth McKnight.

*Footnote: John Reynolds was killed in Lanemark No. 2 pit in October 1889.

N.B. Thomas Harper is named as James Harper in the Scottish Mining Website.