‘I have not recognised fail (foil), a cliff, which gives names to places in the south of Ireland, in our topography. In the north of Ireland it passes into ail (oil), and, though not now a living word in Scottish Gaelic, has at least been in use at some former time in Galloway, as is shown by the names of some hills in that district : Alhang (2,200 feet), Alwhat (1937 feet) — ail chat (haat), cliff of the wild cat ; and Alwhillan — ail chuilean, cliff of the whelps, or chuilhain, of the holly.’ 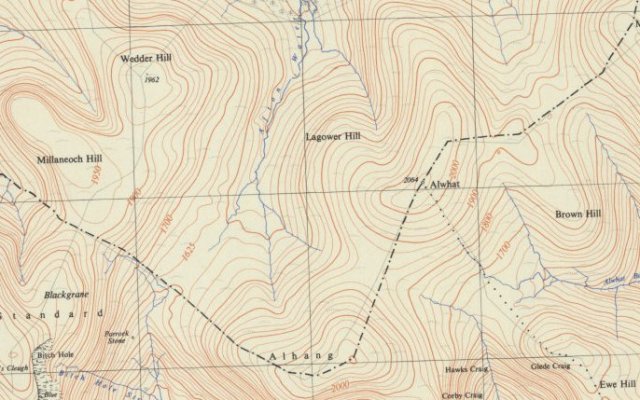 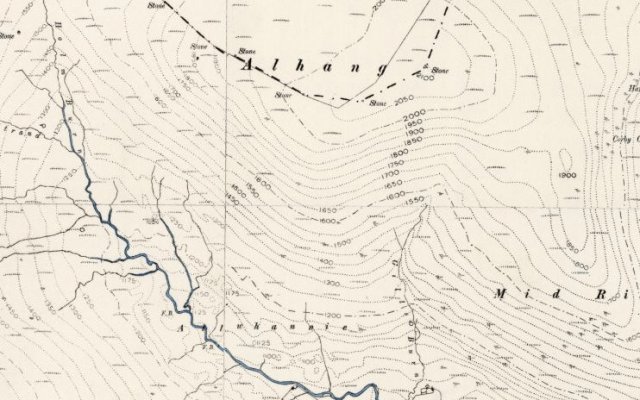 Alhag and Allwhannie (Courtesy of National Library of Scotland)

The first impression, neither Alhang or Alwhat are cliff-like in form. The drop over the boundary is much steeper and it is on the lower slopes of Alhang where Allwhillan is found, yet still little evidence of cliff-like features, other than being steep.

However the description of both hills in the Ordnance Survey Name Books of Kirkcudbrightshire  refers to their surfaces as comprising ‘rocky pastures’, no doubt the source of the stones that were used to mark out the county boundary. This is in keeping with the ‘Dwelly Dictionary’ [2]  entries for ail and al as ail– ‘rock, stone’; al–  ‘rock, stone, solid, rigid or immovable’.