Skip to content
December 16, 2019 flowgently Football Comments Off on From New Cumnock to Newcastle

Lanemark Football Club was formed in 1875 with many of the players already turning out for the existing Lanemark Cricket Club under the auspices of the Lanemark Coal Company. The company worked the coalfield in the vicinity of the lands of Lanemark and the Boig in the west of the parish of New Cumnock, Ayrshire, Scotland. The football ground was situated at miners rows in Connel Park sandwiched between the colliery railway line and the Boig Road. After the club folded in 1920 the Junior side New Cumnock United played at the pitch until they folded eight years later. In 1930 Glenafton Athletic was formed and played at Connel Park through to 1959/60 until they moved to their current home at Loch Park in the village.

FROM NEW CUMNOCK TO NEWCASTLE

The above Newcastle United line up includes three former Lanemark players, Joe Wallace, Tom Crate and Willie Graham all three having lived in New Cumnock and worked in the coalfield at one time or another. Buy how did they get there?

Joseph Wallace was born on 21st April 1867 at Hurlford the son of Robert Wallace, coal miner and Agnes Smith.  By 1881 the family had moved to Connel Park in the parish of New Cumnock, where 14 year old Joe is working in the pits alongside his widowed father and two elder brothers. At some time later the family then moved to Glenbuck in the parish of Muirkirk, however it is not clear whether that was before or after Joe Wallace started playing for Lanemark.  The earliest record of Wallace at Lanemark appears in September 1888 when he was commended for  ‘his good left wing play’ in the 7-0 win over Stevenston Thistle in the 1st round of the Scottish Cup .

The following season he represented the Ayrshire County while playing for Newmilns, on the left wing. Back at Lanemark at the start of Season 1890/1891 he scored for the Laney’s in the 3-2 defeat away to Saltcoats Victoria in the 1st round of the Scottish Cup. He briefly returned to Newmilns and after impressing against Newcastle East End in a friendly in mid-December 1890 he signed for the Newcastle side scoring two goals in his debut in a 4-1 home win over Burnley on Hogmanay.

Thomas was born on 16th June 1871 at Kilmarnock the son of bonnet-maker Emily Thornton, who a few years later married coal miner Charles McCreight. By 1878 the couple and their growing family had settled at Connel Park. It was ten years later in Season 1888/89 that the name McCrate, more often now shortened to Crate, first appears in reports of Lanemark games. The New Cumnock side reached the 4th round of the Scottish Cup that season where they were soundly beaten 8-0 by St.Mirren at Connel Park, nevertheless the ‘dashy forward’ Crate was identified as one of the Laney’s successes that day. The 19 year old was catching the eye and prior to the start of season 1891/92 he signed for Newcastle East End. Tom scored on his East End debut in a 4-1 home win over London Casuals  –‘running the length of the field to score’.

William was born on 12th January 1866 at Dreghorn, the son of coal miner John Graham and Mary Robertson. The couple with their 5 sons and 2 daughters moved to Connel Park in 1870, when William was five years old, where a third daughter was soon added to the family. As the Graham brothers grew up they joined their father working in the Lanemark pits and developed a skill and passion for the blossoming game of football under association rules. Elder brothers George and John played in the first ever Lanemark game, a friendly against  Cumnock at Connel Park on 28th August 1875.

His elder brother John, a half-back, later played for Annbank and was capped for Scotland in 1884 before moving to Preston North End the following season by which time 19 year old Willie had probably kicked off his Lanemark career, also at half-back. In the summer of 1888 he too signed for Preston North End, although on an amateur basis. The English League was formed that season and Willie played alongside his brother John in the first five games before being dropped. Preston went on to win the League unbeaten and the F.A. Cup for the first ever “double” – earning the team the title of  “The Invincibles”. Preston North End retained the title the following   season but John Graham suffered a bad injury that all but ended his professional career in England, and he too returned to New Cumnock with two English League Championship medals, and F.A. Cup Winners medal and F.A. Cup runners-up medal.

Willie Graham remained in Preston and married a Lancashire lass and together they had a son John before the family settled at Connel Park; Willie back in his “pit bits” and lacing his “fitba’ bits” for Lanemark at the start of the 1891/92 season; his young brother James  now the club’s centre-forward while his elder brother Johnnie was making the occasional  “veteran” appearance. It was clear that Willie could play at a higher level and at the start of the 1892/93 season he joined Newcastle East End, on professional terms.

Like Lanemark Football Club the roots of Newcastle East End Football Club can be found in a cricket club when in 1881 Stanley Cricket Club agreed to form Stanley Football Club. However, the following year due to confusion with a club of the same name from County Durham they changed their name to Newcastle East End. In 1889 the club was the first one in Newcastle to turn professional and was one of the founding members of the Northern League which started in Season 1889/90.

With Joe Wallace (1890/91), Tom Crate (1891/92) and Willie Graham (1892/93) now in their ranks Newcastle East End hosted Celtic in a friendly on 3rd September 1892 the at  the opening of their new ground, St. James’ Park.  Celtic, who were on a four match tour,  won 1-0.  In their side that day was Willie Mahey, the brother of Father Charles O’Malley  the priest at St. John the Evangelist R.C., Church in Cumnock. Willie would go on to become the first manager of Celtic and ib his 43 year tenue he won 16 Scottish League titles and 14 Scottish Cups.

Four days later East End entertained Sunderland in a friendly with Wallace and Crate scoring the home side’s goals in a 2-2 draw.

Slightly less glamorously in October 1892, East end faced a “South of Ayrshire” side captained by John Graham, presumably Graham was making a “guest” appearance as his playing days at Lanemark appeared to be over. All three of the former Lanemark players lined up against their former team with Tom Crate bagging a brace in a 7-0 drubbing.

By December of that year local rivals Newcastle West End had fallen on hard times and they approached East End looking for a merger which eventually was secured. On 12 December 1892 the team hosted Middlesbrough Ironopolis at St. James Park in a Northern League match under the name of Newcastle United (although the Football Association formally accepted the new name of Newcastle United on 22 December) with the Lanemark  triumvirate were in the line up.

Newcastle United was accepted into the English League Division Two at the start of Season 1893/94. On 2nd September 1893 the three former Lanemark players Crate, Graham and Wallace, all once miners in the New Cumnock coalfield at one time or another, lined up to face Woolwich Arsenal at Manor Field, Plumstead. The honour of scoring Newcastle United’s first English League goal fell to Tom Crate in a 2-2 draw and four weeks later he scored a hat-trick against them in the return fixture.

The playing record for the three players courtesy of toon1892.com

On the 31st March 1897 Newcastle United played Sunderland in front of a crowd of 5,000  in a benefit match for Willie Graham and Willie Thompson,” two of their older players”, United winning comfortably by 5 goals to 2.

JOE WALLACE: He finished his playing career with Jarrow of the Northern Alliance League . Joe married and raised a family in Newcastle and later lived in Gosforth,  working as a coal miner.

During the depression in the 1930s he fell on hard times and forced to accept handouts for Newcastle United. In his later years he worked as a night watchman. 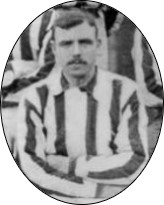 TOM CRATE: He played briefly for Blyth at the end of Season 1894/95 season before briefyl playing for Hebburn Argyle, the following season; both teams playing in the Northern Alliance League. Tom also married in England where he and his wife raised a family of five, although it does appear that he turned out for Lanemark during this period – albeit some of the references to Crate in the newspaper reports at the time were likely to be his brothers Charles and William. By 1901 the family had settled at Connel Park, where five more children were born. Tom was back working in the coal mines and playing for Lanemark. The surname Crate would continue to be associated with football teams,on and off the park, that came and went in the parish of New Cumnock. Tom Crate passed away in 1942, fittingly at the Football Row, Connel Park a penalty kick from Lanemark’s football field, then graced by Glenafton Athletic.

WILLIE GRAHAM: In 1895 tragedy struck the Graham brothers John and Willie and their family when their father, John Graham snr., was killed by a roof fall in the Lanemark Coal Company’s  Burnfoot Pit (Afton No.1).  His grave can still be seen in the Auld Kirkyard.

Willie Graham and his family returned to New Cumnock and lived at Mansfield Terrace for a time while working in the local pits . he returned to the heart of Lanemark’s defence at the start of Season 1898/99. The family continued to grow in number with children born in New Cumnock, Old Cumnock and Ochiltree. Willie passed away in 1937 at Skares Row, Old Cumnock.