The Old Statistical Account of the Parish of New Cumnock [1]

Presbytery of Air, Synod of Glasgow and Air

The Old (or First) Statistical Accounts of the parishes of Scotland were prepared over the period 1791-1799 by parish ministers. The account for New Cumnock was completed the Reverend Mr James Young, who states that ‘the harvest in 1790 was just finishing at the date of the minister’s report (9th November).‘

Under his entry for minerals the minister makes reference to the mines of coal and lime and bemoans the lack of a navigable river that would allow the excess to be sold to neighbouring parishes.

‘Minerals: There are various mines of coal and lime which serve the neighbourhood; though little is consumed, owing to the want of a navigable river; in which case a greater estate would arise from them than the surface of the land.‘

Armstrong’s map of Ayrshire (1775) depicts a Lime Quarry at Barnstoun (Benston) while Lime Craigs are shown north of Corsencon, which is likely  to be those at Guelt just over the parish boundary in Auchinleck.

New Statistical Account of the Parish of New Cumnock [2]

Presbytery of Ayr, Synod of Glasgow and Ayr

The New (or Second) Statistical Accounts of the parishes of Scotland were prepared over the period 1834-1845 with that on New Cumnock reported in November 1838 by the Reverend Matthew Kirkland. In the 140 years since the 1st account the number of lime works had expanded considerably and the entry under ‘Geology and Mineralogy’ is extensive.

Geology and Mineralogy: The carboniferous limestone is found in great abundance, all over this parish, cropping out near the foot of the hills on every side of the valley. There are several beds or posts of great thickness. The same bed of limestone rock about 12 feet deep is wrought at Benstone (1), Mansfield (2), and Polquhortor (3); accompanied with several beds of shale, containing a considerable portions of lime called by the workers fahes. Under this post, there are other beds of limestone in smaller seams that are wrought at Nether Polquhortor (3) and Park (4). At Lanehead (5), the limestone rock occurs, consisting of innumerable beds standing quite on the edge. This mode again occurs on the edge at Polquheys (6).

The mode of working these quarries is by opencast, removing the surface and beds of shale, freestone & c. from the out-crop of the limestone rock, the base of which may in general average from 10 to 18 feet deep. The limestone rock is then easily quarried being in beds from 1 to 4 feet in thickness, and intersected by upright joints. The expense of quarrying may average L 1, 10s per 100 bolls of two imperial bushes.

All the shells and organic remains usually found in carboniferous limestone, occur in the lime rocks of this parish; specimens of Cornuaammonis have been found in the Mansfield limestone quarry. A bed of shell-marl or limestone 2 ½ feet appear in connexion with the limestone rock at Mansfield House. This bed is again seen at Polquhorter and Knockburnie (7) four or five miles above New Cumnock, near Lanehead limestone quarry, which proves the individuality and continuation of the strata, which seem to be in connexion with the basalt.

Limestone is also wrought at Corsancone (8) at a considerable elevation, where it crops out in the side of the breccia hills. This rock is about 25 feet in depth, it is compact, and has the appearance of primitive limestone, and follows the same breccia through the upper part of the parish of Auchinleck. The limestone may be said to be in a solid mass; it contains no fossil nor organic remains. This may have been originally the carboniferous limestone, but by coming into contact with the volcanic breccia, and reduced to fusion, may have entirely obliterated the organic remains and the stratification. The mode of working this rock has been, for many years, by mining. The whole rock, from its compactness, requires to be blasted with powder.

This limestone is burnt in draw-kilns and the lime carried into the parishes of Kirkconnel and Sanquhar and used by the farmers as a manure. About 25,000 bolls of two imperial bushes are sold annually. All the lime quarried in the parish, is burnt at the quarry, and sold to the farmers of neighbouring parish for a manure,

The carboninferous limestone makes an excellent cement for building, that at Benstone, Mansfield &c having the quality of binding or setting under water.

Limekilns: The lime-kilns in this parish, with the exception of those at Mansfield, are of the same construction as those generally used throughout the country, about 20 or 25 feet deep, 20 feet wide at the top, and 2 or 3 feet wide at the bottom, with one, two or three eyes, only large enough to admit a shovel. Those at Mansfield erected by Sir Charles G. S. Menteth, Bart. of Closeburn, are of a better construction, being about 30 feet deep, 6 feet diameter at the top, 8 feet at the middle, 5 feet at the bottom and lined with brick. The lime in the kiln is supported on movable iron bars 1 foot apart, placed in front on a cast iron frame, upon which doors are hung to regulate the draught of air through the kiln. 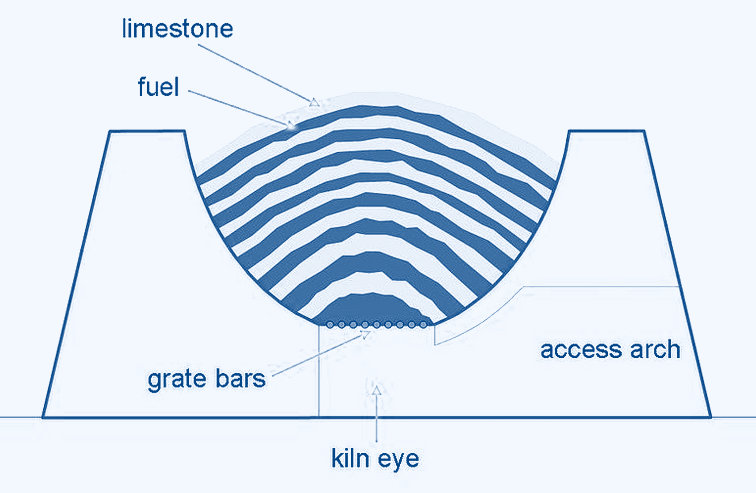 The lime is brought down through the iron bars by a poker upon a grate from which the lime is filled into carts, and the small lime and ashes fall through this grate into the ash-pit. From this construction of a lime-kiln, a great saving of coal is effected, and the lime better burnt. Fire in a lime-kiln having a tendency to rise perpendicularly, and rather contract than expand at the top, a great quantity of the lime in a wide topped lime-kiln at the top is left untouched by the fire, and consequently much unburnt stone, and waste of coal and labour.

Select the limeworks of interest from the menu bar

[1] The Old Statistical Account of the Parish of Old Cumnock (1793), Edina http://edina.ac.uk/stat-acc-scot/

[2] The New (or Second) Statistical Account of the Parish of Old Cumnock (1837) Edina http://edina.ac.uk/stat-acc-scot/