New Cumnock Burns Club was founded in 1923 by a small group of local enthusiasts with Dr. W. Edgar as secretary and treasurer. The first supper was held in the Crown Hotel on 26th January, 1924, when Mr H. Garvan proposed the ‘Immortal Memory.’

The President’s gavel was made from wood taking from the ‘trysting thorn tree‘, that once stood near the Laight, home to John Logan, acquaintance of Robert Burns. The gavel was presented to the New Cumnock Burns Club by founder member Dr. R.H. Gemmell in 1926.

One local tradition suggests that Rabbie composed ‘Afton Water’ under the tree at the Laight. ‘Robert Burns & New Cumnock’ by Chris J. Rollie.

The club was affiliated to the Burns Federation in 1934 as No. 500 with membership listed as 40. In those early days there was a waiting list of applicants for membership and members were almost exclusively local. A glance at our list of past presidents and officebearers recalls worthy old New Cumnock citizens and many of our present members have retained the family association.

The club, in its 50 years’ history, has built up a truly great tradtion, typifying Burns’ ideal:

‘The social, frien’ly, honest man,
What e’er he be,
‘Tis he fulfils great nature’s plan,
And none but he.’

The New Cumnock Burns Club celebrated the bi-centenary of the Bard’s birth with a concert in the Community Centre. H.E. Turner was the President with W. Pearson as his Vice President, A.Davidson was the Secretary and G. Ewing the club Treasurer.

The Auchinleck and District Male Voice Choir opened proceedings with a rousing version of ‘Scots Wha Ha’e’ . The School Play soon followed with a cast which included for the boys W. Nisbet, G. Davidson, A. Alexander, W. Telfer and the girls J. Blair, I. Kerr, L. Cornick. K. Hose and I.. Orr. Readings were given by R. Shankland and W. Connell. The solo singing stars of the evening were G. Gilbert, Stanley Lukasik, G. Connell, Mrs. R. Shankland, Dr. C.Rigg, J. Barnes, Mrs. J. M’Donald, J. Rowan, J. Merry, Jessie M’Donald, Mrs. A. Davidson, and D. Black, the latter no doubt raising the roof with his rendition of ‘Afton Water’. 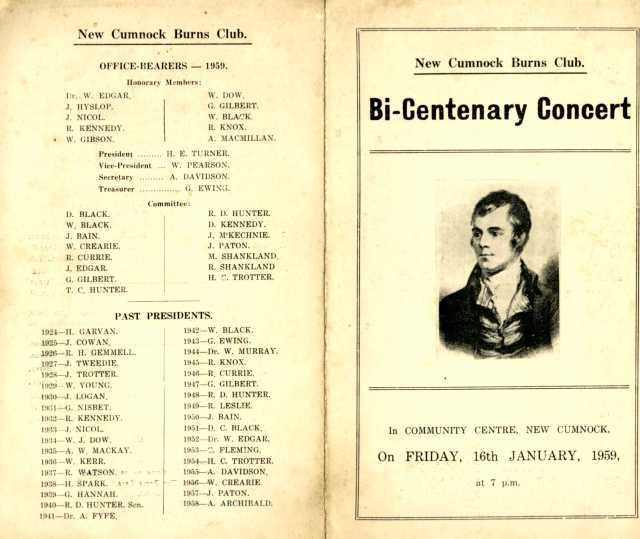 In his ‘President’s Message’, Colin chooses an extract from ‘A Man’s a Man for a’ That’ to typify the real fellowship and cronieship of the New Cumnock Burns Club, 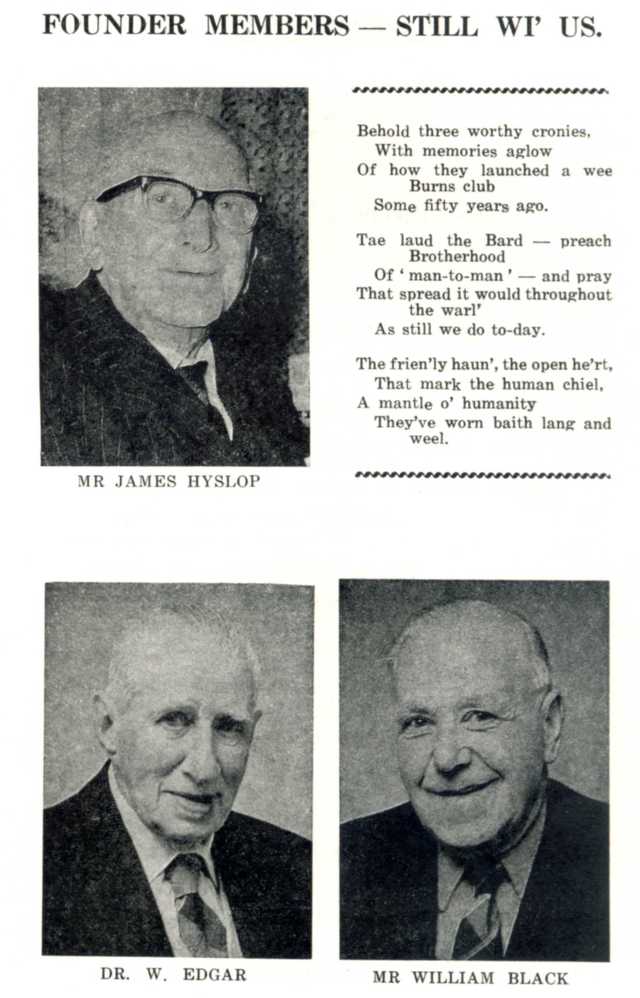 The crowning glory of the Golden Jubilee celebrations of 1973 was the building of the Burns Cairn. Standing in glorious woodland overlooking the Afton Water it is not only a fitting memorial to Robert Burns but is a magnificent symbol of the endeavours of the New Cumnock Burns Club to enhance our community. 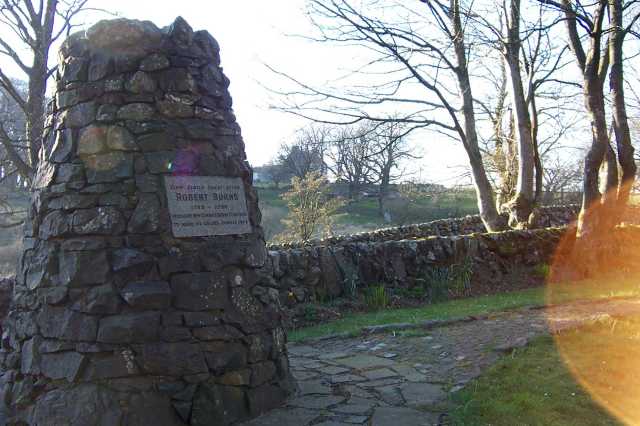 Bi-Centenary of the death of Robert Burns

In 1996 the New Cumnock Burns Club marked the Bi-Centenary Year of Robert Burns death by creating the ‘New Cumnock Burns Heritage Trail’. A small pamphlet was produced including a map of the trail along with some historical notes on the people and places of interest including the McKnights at the Old Mill Inn, Logan of Knockshinnoch and Laight, The Burns Cairn, Campbell of Pencloe, Rev. James Young in the the Auld Kirk and Mrs Moore in the Castle Inn.

The bi-centenary celebrations culminated with the New Cumnock Burns Club publishing Chris Rollie’s (left) unique work ‘Robert Burns & New Cumnock’. Chris joined the committee of the club in 1987 and was President in 1997.

His book records all known associations between Robert Burns and New Cumnock, and provides details of the thirty occasions on which the bard visited or passed through the village on his journeys between Mauchline and Ellisland.

Here’s looking forward to the Centenary in 2024!

Many thanks to past Presidents Bill Nisbet and Chris Rollie. Bill (left) has kindly provided photographs, poems and programmes. Chris has allowed me to quote liberally from his book ‘New Cumnock & Robert Burns’. As I have said before it is no coincidence that the Afton Water flows gently through New Cumnock – I am sure it was put there for Chris !

Of course the community of New Cumnock should raise a glass and toast the New Cumnock Burns Club (Federation No. 500) and its members past and present for their commitment to ensuring that New Cumnock celebrates it’s rightful place in the life and works of our national bard, Robert Burns.