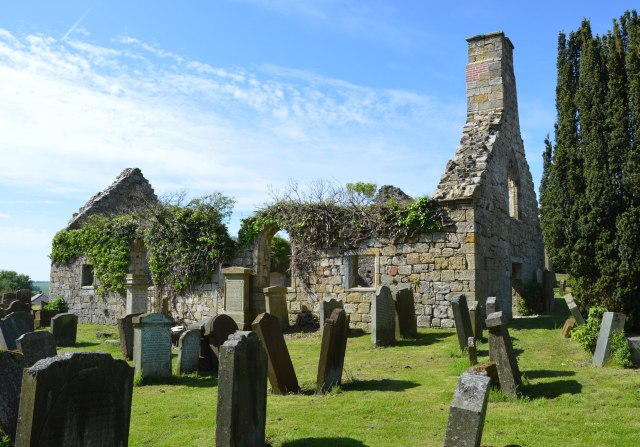 The first parish church of New Cumnock was built on the castlehill in 1659 and it was still in use during the time of Burns. It is now in ruins and is known locally as the Auld Kirk since it was replaced, in 1832, by a new parish. Many of Robert Burns’ acquaintances from New Cumnock are buried in the Auld Kirkyard – John Logan of Laight, Thomas Campbell of Pencloe and John and Bessy McKnight of the Old Mill. Sadly, however their tombstones have not survived. 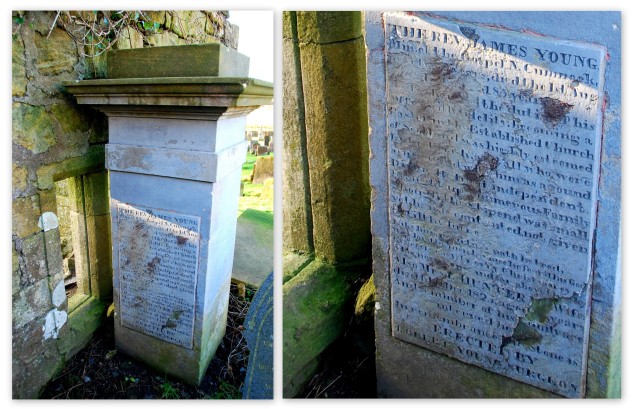 One tombstone that does remain is that of the Reverend James Young. He was minister at New Cumnock from 1758 to 1795 and very much an ‘Auld Licht‘ in the Established Church. His strong Calvinistic views did not appeal to the young more liberal-minded Robert Burns or his friend John Logan (Afton’s Laird), a one-time dissenter from the Estbalished Church. ‘The Kirk’s Alarm’ is a satirical assualt on the Kirk and on a chosen group of ministers for their reaction to the ‘New Licht’ sentiments of Dr. William McGill of Ayr. 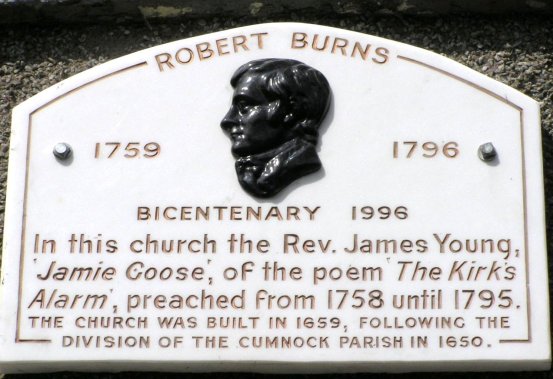 Burns plaque at the Kirkport

The Reverend James Young did not escape a severe case of caustic Burns ! His ‘Auld Licht’ attitude and refusal to baptize the child of the ‘wicked Lieutenant’ Hugh Mitchell of Dalleagles and Grizel Logan (sister of Rabbie’s friend John Logan) guaranteed his inclusion in ‘The Kirk’s Alarm’, in which Burns mocked him as Jamie Goose!

It would appear that Burns had some inside knowledge to include the the phrase ‘He has cooper’d an ca’d a wrang pin in’t.’, since this is a reference to Young’s father, a cooper in Falkirk.