Gordon of Earlston: The ancestral seat of the Gordons of Earlstoun stood a few miles north of St. John’s Town of Dalry in Kirkcudbrightshire. William, 3rd Gordon of Earlston, was banished in 1664 for supporting the Covenanting cause and some fifteen years later he was caught by government forces on his way to the Battle of Bothwell Bridge, 22nd June 1679, and killed near Hamilton.  His eldest son Alexander was captured at the battle and imprisoned at Edinburgh Castle and then later on the Bass Rock. His second son, Sir William Gordon married Mary Campbell, heiress of Sir George Campbell of Cessnock, (another leading Covenanter who had also been imprisoned on the Bass Rock) and a landowner in the parish of Cumnock, with properties in what later became the parishes of New Cumnock and Old Cumnock. 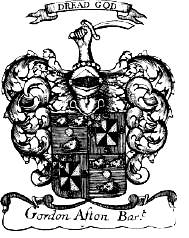 Sir William died without issue in 1716, and his elder brother Sir Alexander, now a free man, succeeded as 2nd Baronet of Afton. Sir Alexander was succeeded by his son Sir Thomas Gordon and in turn, he by his son Thomas, younger of Earlston. Thomas married Catherine Campbell, daughter of Daniel Campbell of Shawfield and together they had two sons, Thomas and Daniel and one daughter Catherine.

Catherine Gordon Stewart: In 1756 Thomas Gordon acquired the property of Stair on the banks of the River Ayr. Thereafter he was known as Thomas Gordon of Afton and Stair. Tragedy struck the family with the deaths of Daniel in 1762 and Thomas the younger four years later. On her father’s death Catherine Gordon succeeded to estates of Afton and Stair. In 1770 Catherine married Colonel Alexander Stewart, grandson of the Earl of Galloway.  Her husband attained the rank of General  (later Major General) and Catherine Gordon thereafter known as Mrs. General Stewart.

General Stewart formed the Afton Mining Company to work the minerals in the Gordon’s Afton estate . His partners in the venture were three advocates based in Edinburgh – William Stewart of Edinburgh, Andrew Crosbie of Dumfries and Alexander Ferguson of Craigdarroch, Dumfriesshire in 1772 they fell by the wayside, following the collapse of Ayr Bank . General Stewart forged ahead and the Afton Mining Company worked the coal reserves in the lands of Straid, some two and half miles south-east of the village of New Cumnock. Here lay rich seams of the  cannel coal (so called because it burned brightly) and importantly nearby run the New Cumnock to Dalmellington road built by McAdam of Craigengillan, Dalmellington.

When the Gordon-Stewarts settled at Stair House Robert Burns and his family worked Lochlea Farm some 4 miles to the north in the neighbouring parish of Tarbolton. Burns formed the Tarbolton Bachelors Club in 1780 and it was here he befriended David Sillar, son of Patrick Sillar who farmed at Spittalside on the outskirts of the village. David had become besotted by Peggy Orr, the Stewart’s nurse-maid at Stair and Burns played ‘blackfoot’ to secure his friend an introduction.

After one visit to Stair, Burns left behind some of his songs in manuscript form which were shown to Mrs Stewart, ‘who was at once struck by its elegance and tenderness’ and requested that Burns be shown to her drawing room on his next visit. They quickly formed a high opinion of one another and Mrs Stewart requested that he send her some copies of his work. Tradition states that this was the one and only meeting between Mrs General Stewart and Robert Burns, however from their correspondence emerged two of the most important manuscripts of Burns work – called the Stair Manuscript and the Afton Manuscript in honour of the two estates held by Mrs General Stewart.

In September 1786, Burns wrote to Mrs. Stewart enclosing a parcel of songs including ‘The Lass of Ballochmyle’ . In that same Autumn a new bridge was built at Ayr over the River Ayr and Burns paid tribute to his patroness in his freshly penned ‘The Brigs of Ayr’

On 19th November, 1787 James Ferguson the son of Ferguson of Craigdarroch, former partner of General Stewart in the Afton Minerals Company died unexpectedly after a brilliant scholarship at Glasgow University. Some three weeks later tragedy struck the Stewart family when their eldest child and only son, Alexander Stewart, Lieutenant in the 3rd Regiment of Foot (The Buffs), died at Military Academy, Strasburgh, at the age of 16, 5th December, 1787.

Burns, in September 1788, whilst making another return trip between Ellisland and Mauchline composed the elegy ‘A Mother’s Lament for the death of her son’ and sent a copy to Mrs Ferguson while the copy sent to Mrs Stewart carried the title ‘A Mother’s Lament for her only son’. New Cumnock was a frequent stopping off point for the poet on his journeys back and forth from Mauchline to Ellisland and perhaps it was in the shelter of the Old Miln or the Castle Inn in the village that he put his thoughts to pen.

In 1791 Burns sent Mrs General Stewart a collection of thirteen unpublished poems – known as the Afton Manuscript which included ‘A Mother’s Lament’ and probably his most famous work ‘Tam O’ Shanter’ and for New Cumnockians his most loved work ‘Sweet Afton’.  It also carried the inscription –

‘To Mrs. General Stewart of Afton. The first person of her sex and rank that patronised his humble lays, this manuscript collection of Poems is presented, with the sincerest emotions of grateful respect, by the Author’

The lamenting mother was a grieving widow some four years later when her husband General Stewart died in December 1794 after a long illness and soon after Robert Burns died on 21st July 1796 at Dumfries, aged 37 years old.

John McVie writing in 1926 “Mrs General Stewart decided to part with her Stair property. She sold on 25th April 1796 to Archibald Montgomerie and on 4th March 1797, she obtained a feu from her son-in-law Cunninghame of Enterkine and on it she built Afton Lodge though it is stated that the house was built in 1790. The extent of the feu is commonly stated to be 40 acres though it actually consisted of and still consists of ‘25 acres in the north park of the farm of Shacklehill, part of the estate of Enterkine in the parish of Tarbolton’.”

Although Burns’ old acquaintance David Sillar never won the heart of Peggy Orr (she broke off their engagement) he kept contact with Mrs General Stewart. A change in fortune after a series of failures saw Sillar inherit a small fortune and he was able to loan Mrs Stewart a sum of £2,000 after she had taken up residence at Afton Lodge.

Mrs General Stewart died in 1818, leaving behind her four daughters, Catherine the eldest, wife of William Cunninghame of Enterkine and the unmarried Grace, Ann and Jean. Ann Stewart died on 7th February 1836 and her sister Grace died at Afton Lodge on 18th March 1841, and both lie buried beside their mother in the Stair Kirkyard.

Mrs. Stewart’s daughter Catherine and her husband William Cunninghame of Enterkine, had a son William. He married Miss Allason, heiress to the Logan estate and was thereafter known as William Allason Cunninghame, Esquire of Afton & Logan. In 1850 he sold the Stair Manuscript and in 1880 he gifted the Afton Manuscript to the Burns Cottage Trustees, Alloway and these are now housed in the Cottage Museum for public viewing.

In 2009,  I had the pleasure of taking part in the BBC Radio Scotlland programme ‘House with a past’ broadcast from Afton Lodge discussing Catherine Gordon Stewart’s connection with New Cumnock and Robert Burns with Dr. Fiona Watson.