A stroll around the Auld Kirkyard of New Cumnock will reveal the names of some of those parishioners that fell in the Great War dearly remembered on family headstones . Familiar local place names such as Dalricket, Roughside, Connel Bridge engraved on sandstone or granite and sharing that stone with far off solemn place-names  such as Somme, Gallipoli and Palestine.

Predating these tombstones by many years is that of local farmer Ivie Campbell born in 1754 at Garclaugh and who later settled with his family at Dalgig five or six miles further up the Nith valley. His three sons George (at Lanehead) , William (at Braehead) and Ivie (at Dalgig) continued to farm in New Cumnock, while  seven daughters married and moved out of the parish. Through time many of his descendants spread across the Commonwealth corners of the world  – Australia, New Zealand and Canada – and today there is an active group of genealogists, known as ‘The Ivie League’ that do fantastic work in keeping the family history alive.

A strand of which carries us from the Fields of New Cumnock to Flanders Field.

Before moving to Braehead, William Campbell (Ivie’s son) and his wife Jean Scott lived at Maneight and it was here on Christmas Day , 1814 that their daughter Jean Campbell was born, one of ten children. Like many other of the Campbell girls Jean moved away from home and in 1842 she married Thomas McCrae from Kells, Kirkcudbrightshire.

Seven years later Thomas and Jean, along with their children David (3) and daughter Margaret (1) set sail for New York aboard ‘The Empress’. On the passage across Jean gave birth to a baby girl, but sadly the infant lived only ten days and was buried at sea. Arriving in New York, the family finally settled at Guelph, Ontario in Canada.

Thomas and Jean’s  son David McCrae grew up to have a career in the Canadian Military, reaching the rank of Lieutenant-Colonel and he married Janet Eckford originally from Forfar and together they had four children. 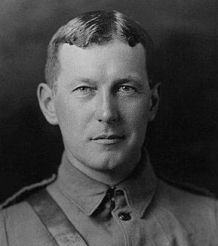 Their second son John Alexander McCrae born on St. Andrews Day, 1872  went on to study Medicine at the University of Toronto and while there he published his first poems and also joined the Toronto militia. When Britain declared war on Germany at the outbreak of World War I, John McCrae was appointed as a field surgeon in the Canadian artillery and in 1915 took charge of the field hospital during the Second Battle of Ypres.

The death in battle of one his former students inspired McCrae to write on May 3, 1915 one the most powerful and memorable poems of the Great War.

In Flanders fields, the poppies blow
Between the crosses, row on row,
That mark our place; and in the sky
The larks, still bravely singing, fly
Scarce heard amid the guns below.

We are the Dead. Short days ago
We lived, felt dawn, saw sunset glow,
Loved and were loved and now we lie
In Flanders fields.

Take up our quarrel with the foe:
To you from failing hands we throw
The torch; be yours to hold it high.
If ye break faith with us who die
We shall not sleep, though poppies grow
In Flanders fields.

Almost three years later on 28th January 1918 (and in command of the No. 3 Canadian General Hospital) Lieutenant Colonel John Alexander McCrae, grandson of Jean Campbell of New Cumnock,  died of pneumonia. He was buried the following day in the Commonwealth War Graves Commission section of Wimereux Cemetery with full military honours.