The two-storey tower house once stood  on the hill above the modern day farm of Knockshinnoch , close to the large clump of trees at the edge of the footpath that passes by this way.  It was home to the Dunbars of Knockshinnoch, a branch of the family of the Dunbars, Barons of Cumnock, whose ancient seat once stood on the castlehill at the heart of what is now the village of New Cumnock. 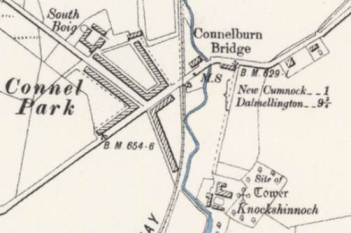 Another John was at the Battle of Mauchline Muir in 1642, punishment for which resulted in ‘his house being looted and damaged, his two horses and seven cows and calves stolen’ and although he escaped to Ulster he was ‘pursued there too.’

The last of this family appears to have been Hugh Dunbar, a Covenanter who survived imprisonment in what was the hell-hole of Dunnottar Castle. In 1676, he  granted the lands to Hugh Douglas of Garallane (Old Cumnock), one of his kin through marriage. who married Margaret Craufurd of Camlarg (Dalmellington).

In the gable-end of the Knockshinnoch byre a date-stone that once adorned the tower has been embedded. It carries the couple’s initials ‘HD and MC’, the date of 1691 and their family arms namely a ‘heart and stars’ for Douglas and ‘a stag’s head’ for Craufurd – giving an heraldic pun ‘Heart to Hart’.

Knockshinnoch was later held by the Logan family when the property was defined as the ‘Twenty shilling land of Knockshinnoch of old Extent, with the Tower, Fortalice, Manor Place, House, Biggings, Yards, Parts, Pendicles and Pertinent thereof ‘. John Logan of Knockshinnoch and Laight is well remembered as an acquaintance of Scotland’s bard Robert Burns.