Today is National Poetry Day with a theme of water.

This combination for most New Cumnockians would bring one work to mind  – our national bard Robert Burns‘ world famous tribute to Afton Water , his romantic ‘Sweet Afton’.

Of course today New Cumnock has its very own Rab,  in the form of the nationally acclaimed Rab Wilson.

Rab is a former ‘Robert Burns Writing Fellow for Dumfries and Galloway’ and he is currently the first ‘James Hogg writer in residence’, following the footsteps of the famous Ettrick Shepherd.

Less well known is New Cumnock’s own poet shepherd, Thomas Murray and on National Poetry day it seems fitting to celebrate his work.

Thomas Murray was the son of a shepherd of the same name and his mother a herd’s daughter. He was born in 1835 at Castleo’er in Eskdalemuir, Dumfriesshire, one of thirteen children.

Thomas took to the hills as a shepherd at the farm of Craignell, Minigaff in Kirkcudbrightshire.

Here he made regular contributions to the poetical column of the Galloway Gazettte.

Later he became a shepherd in the wild upland parish of Carpshairn and from there he moved to the Moor of Deugh in the parish of New Cumnock.

While at New Cumnock, Thomas had a collection of poems and songs published in a book called ‘Frae the Heather’. Included is his tribute to the bard in the  ‘The Songs of Robin Burns” where he writes –

and mony mair are rare ”

Naturally a selection of his poems reflect on his working life as a shepherd such as “The Auld Pet Ewe” and his rant “The Collie Dog Tax“. However, Murray’s most celebrated poem in the parish is his “New Cumnock Herd Fair” where he tells how the herds gather from the wilds of the Rivers Nith, Deugh and Afton to meet in fellowship in 1897 at the town’s Crown Hotel.

It fell in the year o’ aighteen-ninety-seven,

The day was the shortest, the breath o’t was chill,

For keen was the frost, and the mountains were hoary.

And iceshuggles hung in the brows o’ the rill.

Yet calm was the weather, and flocks feeding quaitly,

And sae fir the Shepherds the prospect was rare.

They hied frae the wilds o’ the Nith, Deugh and Afton.

To haud, as they ca’ it, New Cumnock Herd Fair.

When errands were dune wi’ the merchants and cobblers,

According to custom we met in the Crown, –

To business gaed promptly, and when it was finished,

Withoot meikle bustle the board was surrounded,

A hoary auld sire got a ca’ to the chair,

Forenent him a humorous joker was seated,

And banter was rife at New Cumnock Herd Fair.

When justice was dune to the tea and the trimmin’s,

Were rendered wi’ vigour – if no to a hair,

To suit the fine ears o’ the learned and the tasty,

But that’s no oor drift at New Cumnock Herd Fair.

All unceremonious we needna a Programme,

The singer first ca’d on is sune on his feet,

He pitches at random, yet figures wi’ spirit,

And ca’s up the neist on resuming his seat.

We frankly confess that as sons o’ the heather

But blithe on the moorlan’s we stalk wi’ Dame nature,

And gather the notes that we sing at the Fair.

The toast list was shirt, the speeches were ditto,

Nor famous for ought but the hearty design.

As taxin’ the noddle for elegant phrases

Might cause ane o’ the thread o’ his subject to tine.

The hostess was pledged, and she brawly deserved it,

Wi’ cheers for the Chairman we joined in conclusion,

And noo for the cudgels, the plaids, and the bonnets,

Aside in the corners each lifted his ain,

Sae left we the Crown in the best o’ gude humour,

And hopes in due season o’ meeting again.

We linked to the top o’ the mill-brae, and halted,

And there took gude-nicht, and sent cheers to the air;

Then each held awa to his wife or his sweetheart,

To tell them the news o’ New Cumnock Herd Fair.

Members of the committee at the Crown in 1973 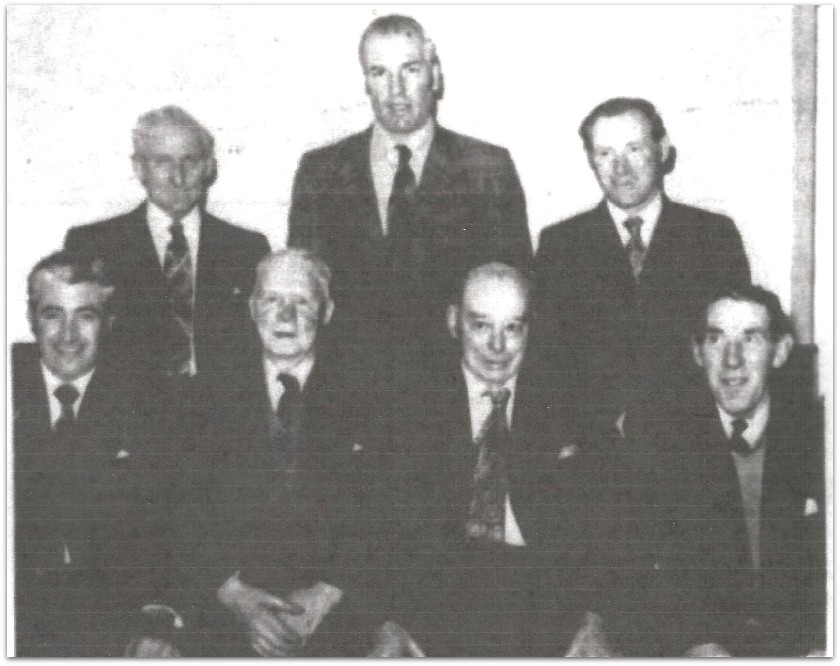