Today 3rd August is the eve of the feast of St. Dominic and accepted as the day in 1305 that our patriot Sir William Wallace was said to have been betrayed and captured at Robroyston near Glasgow. Initially imprisoned by Sir John Menteath, Sheriff of Dumbarton in the great castle on the rock, Wallace was taken to Carlisle and from there paraded in his journey south to London where he was exectued on 23rd August 1305.

Of particular interest in the context of New Cumnock is that according to Blind Hary in his epic work ‘The Wallace’ it is from his dwelling at Blackcraig that Wallace and his men depart for Glasgow and an ill-fated meeting with Robert the Bruce. For it is the Blak Rok, at the head of Glen Afton in New Cumnock, which is the location last mentioned before Wallace is taken at Robrastoun.

In the section on Blind Hary on this web-site (click here)  a case was made for revisiting Hary’s words and explaining the line ‘Apon that sted a ryall house held he‘ as a reference to crown-lands. The rediscovery of the Wallace seal in 1999 had revealed that Sir William Wallace was the son of Alan Wallace while in the Ragman Roll of 1296 appeared the entry of ‘Alan Wallace, crown-tenant in Ayrshire’.  Could the lands of Black Craig, New Cumnock in Kyle Regis (King’s Kyle), where stands the majestic rock known locally as Castle William, be the lands where first Alan Wallace and then his son William was a crown-tenant? 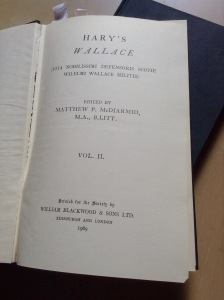 A prized possession of mine are the two volumes of ‘Blind Hary’ edited by Matthew P. McDiarmid and printed by the Scottish Text Society (1969).

McDiarmid’s analysis of the incident when ‘Sir David Graham demanded the lands and goods of Sir William Wallace because he was leaving the kingdom without the leave or approval of the Guardians’ was supplemented in his notes on Blackcraig with the thought.….‘It would be interesting to know if this was the property of Wallace demanded by Sir David Graham.‘ If only McDiarmid had access to the information that the Wallace Seal would reveal almost thirty years later.

Matthew Purdie McDiarmid (in some records McDarmid) was born on 16th May 1914 at 33 Colgan Street, Barrhead, son of George Gall McDiarmid and Mary Highgate Purdie. Coincidentally the assistant registrar of birth as that time was a Wallace!  His father was a master blacksmith amd would go on to serve as the Provost of the Burgh of Barrhead for six years (1930-36). He was also the Chairman of the Scottish Committee of the National Joint Apprenticeship Council for the Farriery and Blacksmith Trade, his services recognised with an MBE in the 1951 New Year’s Honours List and five years later honoured with the Freedom of the Burgh. The McDiarmid Perpetual Challenge Cup continues to be competed for in the Scottish Open Farriery Cahmpionships under the auspices of  the Royal Highland and Agricultural Society.

Matthew P. McDiarmid went on to study at the University of Glasgow and then at Balliol College Oxford before taking up the position of assistant lecturer in English at Aberdeen University before the outbreak of World War II, at which time he entered military service as a cryptographer.  From Aberdeen he moved to Queen’s University, Belfast in the early 1950s where he lectured in literature for twelve years; Seamus Heaney – a future Nobel Pize winner – one of his students.  He returned to the Granite City in 1964 and lectured at the University until his retirement some eighteen years later.

As well as editing two volumes Blind Hary’s ‘The Wallace’ he compiled literary and historical notes for three volumes of Barbour’s ‘The Bruce’.  He edited texts of Edinburgh poet Robert Ferguson,  referred to by Burns as ‘my elder brother in the muse’ and produced a version of Sir David Lindsay’s ‘Satire of the Three Estates’ and works on Robert Henryson and other of the celebrated Scots Makars.

McDiarmid was one of the leading members of a pioneering generation of Scottish academics who laboured and campaigned for a proper place for Scotland’s literature in Scottish universities. At the opening of his career, no Scottish university had a dedicated professor of Scottish literature; by the time of his death, there were six.