The Knockshinnoch Disaster of Thursday 7th September 1950 is remembered for the tragic loss of 13 men (more here) and the subsequent heroic rescue of 116 men trapped brought to the surface over two days later (more here).

Overman Andrew Houston, drew up a rota regulating the order in which the imprisoned men were to be taken out . He decided that the older men should go first, but as the strain of waiting began to tell on some of the younger members, many of them were allowed to go before all the older men had gone. All the resuced men were medically examined at the undergound fresh-air base before they were allowed to proceed outbye to the surface.

Third to arrive at the surface was 63 year-old Spanish born Juan Carracedo who remarked ‘I did not worry. What could be done was being done. It’s nice to have friends.‘ “The older men set a great example to the younger men and hearing that Juan had reached the base in 13 minutes, Andrew Houston said to the men-‘Well boys, old Wang has made it out in 13 minutes , there’s no reason why any man shouldn’t get out in 14 minutes’. It was some time before the men realised Houston was pulling their leg”. [Coal. NCB Magazine, October 1950]. Juan, not only survived the disaster but went onto live to the grand old age of 94 years old. 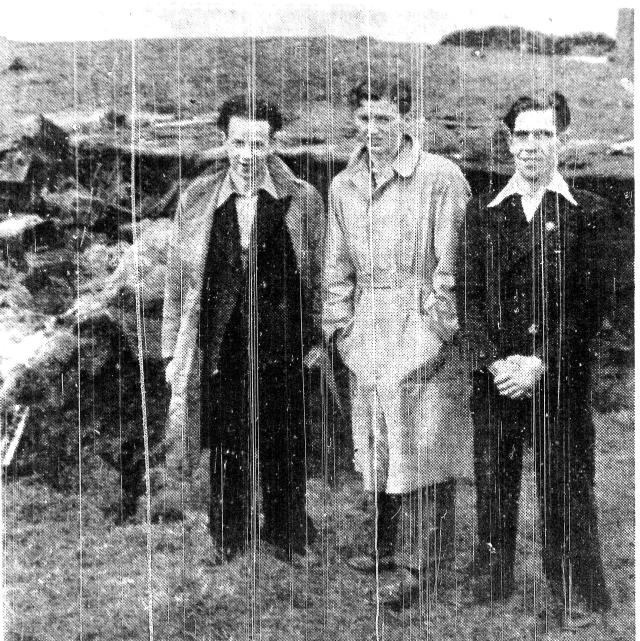 Matters hadn’t been as smooth with the rescue of 19 year old Gibb McCaughtrie the first man brought to the surface. With the news that the percentage of gas was in the increase it was considered that others would soon collapse and a plan was put in place to get the young man to the surface. “Gibb was borne out all the way on a stretcher a distance of two miles – part of the wy by menw wearing heavy breathing apparatus. His rescue involved the use of 27 team members and at once it became obvious that even with men able to walk some other system of rescue would have to be evolved. His arrival was greeted with joy not only by the waiting crowd but also by the trapped men who were told of his arrival by phone’ [Coal. NCB Magazine, October 1950] . Once out of Ballochmyle Hospital, Gibb of Ashnock. Leggare returned to the scene of the crater with workmates Alex Harrison of Hamilton Drive (90th man to the surface) and Robert Daubney of Polquheys Road – the 100th man brought the surface. 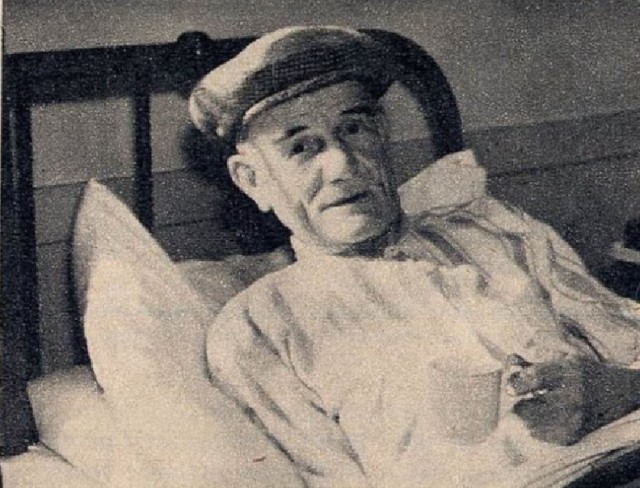 The oldest of the trapped was 68 year-old James Haddow, who is pictured here recovering and enjoying a cup of tea at Ballochmyle Hospital.

A familiar face in this group of miners recuperating miners at Ballochmyle Hospital is Glenafton Athletic legendary defender Bill Gray in the great side of the 1930’s(back row, 1st left). He was no stranger to pit tragedies and survived the Bank Pit Explosion of December 1929, where 15 men were badly burned and three men later died of their injuries (Archibald Freeburn, John Cockburn and John Breckney).

Sir Andrew Bryan’s report of the formal investigation into the Knockshinnoch Castle Colliery disaster contains this sentence, “It must be acknowledged that the leadership and example set by Andrew Houston was of a very high order.” Andrew, the son of a miner was born at Pathhead and started work at the nearby Pathhead Colliery as a 14 year old before moving across the parish to the Bank No.1 pit to work as a pony driver at later at the coal side beside his father.  In 1930  he befriended David Park, oversman at Afton 1 Colliery and on his advice worked to get his fireman’s certificate which he did in due course and through time was oversman at Afton No.1 , Bank No.1, Bank No.6 and eventually by 1994 at Knockshinnoch Colliery .[Scottish Mining Web-site ]. Andrew’s younger brother James was one of the 13 men lost in the Knockshinnoch Disaster. Pictured here with Andrew are two of the rescued men Andrew McKnight and James Walker both of Burnside.

At the time of the inrush of the moss into the Heading No. 5 some eight men escaped by way of the main pit shaft. Among those that escaped were James Serrie (26), locomotive driver of 96 Lanemark Row and Sammy Hill of Connel Park. ” After hearing the rushing noise of mud flowing into their workings – they were chased by a solid wall of moss to the pit bottom. They later returned to aid rescuers” [Cumnock Chronicle]

On Sunday 17th September a ‘Service of Divine Worship’ was held at the Martyrs’ Church ‘with thanksgiving for the rescue of 116 men and with remembrance before God of those who lost their lives .’ The officiating ministers were The Right Revered Hugh Watt (Moderator of the General Assembly of the Church of Scotland), Rev. G.M. Hardie (Secretary of the Scottish Baptist Union) and the Rev. A.G. Stewart (Moderator of the Presbytery of Ayr). The local ministers were the Rev. A. R. Lowrie (Arthur Memorial Church), Rev. G. Morgan (Baptist Church), Rev J. Buchanan (Bank Church) and Rev. J. Waugh (Martyrs’ Church). The service included the reading of the names of the 13 men followed by two minutes silence.

A list of the rescued men in the order they were brought to the surface were given in the Cumnock Chronicle of the time and are reproduced.

I have ordered the lists in alphapetical order of the surname and the the number on the left hand column represents the order in which the selected man was brought to the surface.

Please understand with such a long list (116 names and addresses) that some errors in spelling , transcription may have occured. If you know of any corrections then please let me know. Apologies in advance for any errors 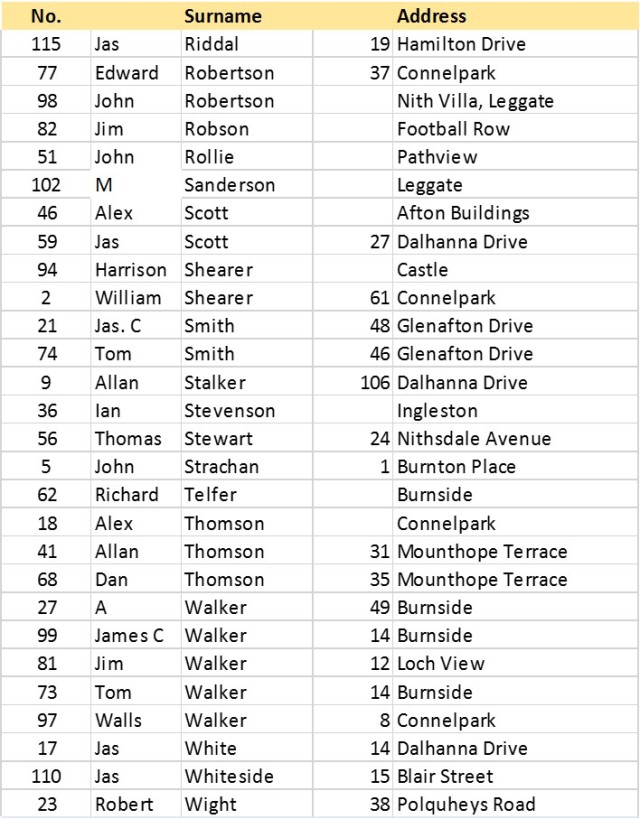 4 Responses to Knockshinnoch – The Rescued Men